OK, so I haven’t posted here in a long while, and this post is just an addendum to the one below. My apologies, though I’d like to post some more soon.

As for updates to the “missing Columbo” mystery:

Unfortunately, not all that much progress has been made on it. Though TomCat has searched high and low for it (thanks, TC!) and come back with a few different episodes of two TV shows, both I and the others who remember it, at IMDb v2.0 and Reddit, are positive none of those is it.

Some more comments. Here’s what I originally wrote:

Unless I’m imagining it, there was a Columbo in which the killer had a clever alibi that involved apparently being in San Francisco while the murder was happening in Los Angeles; in reality, the villain had killed his victim and then flown his private plane to Frisco, making it in time for his meeting. The only problem is, I can’t find it on the episode list! I first thought it was the one with Johnny Cash [which also involves an airplane], but it doesn’t look like it. Anyone know this one? 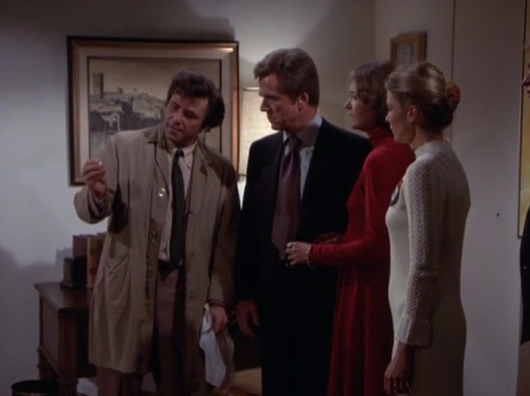 But that alibi just doesn’t appear. Perhaps I was conflating it with another episode? But no Columbo episode seemed to have that alibi—as I confirmed on the Columbo subreddit and with the webmasters of several different Columbo websites.

I posted the question to IMDb v2.0 (where ended up the largest, er, diaspora of folks who had been on the IMDb boards when they were shut down) and to Reddit. Many people on both also remembered the episode; one, “@jervistetch” at v2.0, even wrote this:

I feel like I remember a detective/police investigator at an airport actually looking through a book where flight schedules had been recorded and visibly noticing that it had been altered.

The astounding thing is that that was exactly what I remembered—but I had never written that. In fact, up until that point, I had never mentioned the logbook.

We both distinctly remembered the times (which the killer changed) being in pencil and the detective character, who we thought was Columbo, noticing the pencil marks where the previous time had been written.

In addition to a slew of people at Reddit, two others at v2.0 concurred with my and @jervistetch’s recollections.

Someone else mentioned that it could be the second murder in the episode.

Still, no one could find an example of this plot line anywhere.

Recently, we confirmed our memories diverged on another point as well: two people remembered a shot of a man (the killer, maybe?) in the cockpit of the plane, while I didn’t (and still don’t) remember one.

Several guys on Reddit thought they knew the episode but, on searching, couldn’t find it.

That’s pretty much everything I’ve got right now. I’d love to know the answer.

3 Responses to The Californian Airplane Mystery