OK, folks, it’s time for the solution to “The Unhinged Man”… 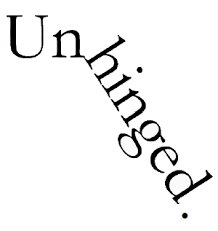 The murderer is Terence Crane. He is the only one not in a pattern of the names, just as in “Thirteen at Dinner.”

Inurhadi’s logic was correct and made up Geoffrey Lord’s original solution:

Cardinal is indeed derived from the Latin cardinalis, or “hinge.” Based on that fact–“the derivation of one word in particular,” as Geoff put it–he originally deduced that the killer was William Cardinal.

But then Geoff realized the most pertinent fact: the killer was not the hinged (“cardinal”) man but rather the unhinged man–the man who did not fit the “hinged” pattern.

But what was the pattern, and how did it relate to hinged, or unhinged?

What are some meanings for cardinal? The Catholic cleric, of course, and the bird (“volucrine”!), and… The four cardinal directions.

And our names? Leaving aside the avian surnames and focusing on the Christian names: Norman, Sam, Edgar, and William. North, South, East, and West again.

But there is one name that is not one of the cardinal directions–un-cardinal, shall, we say, or un-hinged: Terence Crane.

(By the way, the individual to whom Mr. Lord’s last comment was directed was Prof. Tewksbury, who obviously came up with the Latin derivation of cardinal.)

I will be your Virgil through the infernal regions and Purgatory to Paradise and the music of the spheres. Nothing Danted, so to speak.