Post-Easter Flights to St. Marie, Anyone? 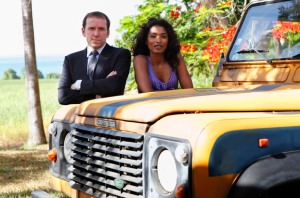 In keeping with our post-Easter celebrations, I’m thinking of giving this blog an unceremonious resurrection and posting again for the first time in–what?–four years? Has it really been that long? A few changes, for anyone interested: my favored genres have expanded (though–don’t fret!–detective stories are still one of them!), and I now have much less time for pleasure reading. The inevitable march of life, I suppose. Anyway, I have also changed in my tastes, so to speak: John Dickson Carr (JDC), for example, has overtaken Agatha Christie as my favorite detective-story writer, with Gladys Mitchell following close behind him. It has been that way for a while, interestingly enough (once I started to read more of their books!). Anyway, to get back on subject for this post, I’ve started watching, in that long four years, the British TV show Death in Paradise, which is an excellent detective-fiction program. One of my favorites. So–I was thinking, what would be a better way to resurrect this blog than a list? (Yeah, yeah, all blogs do that when the blogger can’t think of what else to do. Je comprends, et je regrette.) So–with all apologies to the late, great Andrew Sarris, whose The American Cinema should be the go-to guide for anyone and everyone who loves the movies–here are my favorite and least-favorite Death in Paradise episodes, organized in the Sarrisian categories of “Pantheon,” “Far Side of Paradise” (even more appropriate here, hm?), and my contribution, “Bottom of the Barrel,” with commentary as we go along. Whether you enjoy Death in Paradise or not (I hope you do!)–I hope you’ll have fun following along! 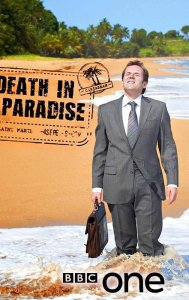 10b. “An Unhelpful Aid,” directed by Alfred Lot, written by Robert Thorogood—Season 1, Episode 6: An out-of-left-field pick, though I know that I shouldn’t really put a No. 11! This episode ties with No. 10, however, because, while its plot is weaker than both “Political Suicide” and “An Artistic Murder,” it is a far more fun episode than either one. Even a weak Thorogood episode is better than some others penned by less inspired writers! The interplay between Fidel and Dwayne and the interim DI, played by Shirley Henderson of Harry Potter fame, is a highlight of the series, with Poole playing a good armchair detective role (more similar, it must be stated, to Dr. Fell in Carr’s The Blind Barber and The Arabian Nights Murder than to Nero Wolfe, Mycroft Holmes, or [in a few stories] Hercule Poirot!). The episode is so much fun that it makes up for the weak plot, which even a non-mystery buff may guess without much difficulty. Needless to say, though, this being a Thorogood episode, the whole thing is completely fair, well-clued, well-written, and well-paced. 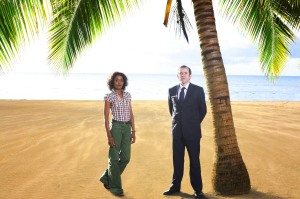 The Far Side of Paradise: 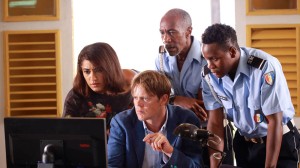 Bottom of the Barrel (no order here): 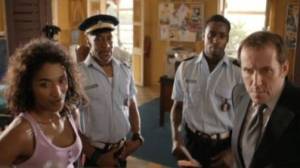 Well, there are some categories and some favorite and not-so-favorite episodes! I think it’s really an excellent show, and I can’t wait for Season 5 to premiere here in the U.S.! All the best to everyone reading, and Happy Easter! 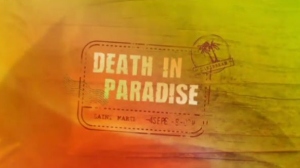 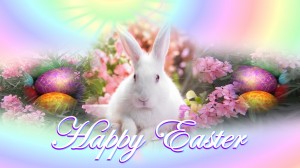 This entry was posted in Reviews and tagged Best of..., Death in Paradise, Lists, Masterpiece, Post-GAD, TV. Bookmark the permalink.